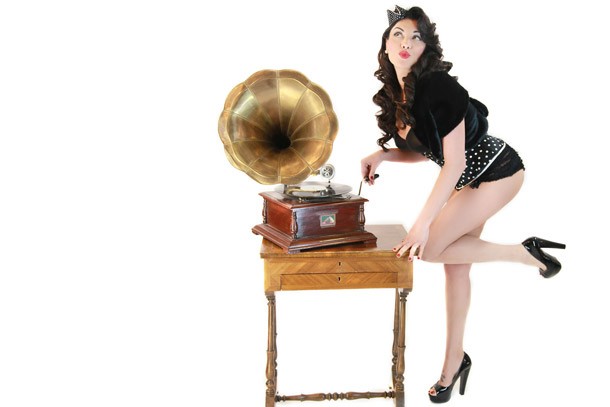 Madame Betty…… a person really talented,rich of energy and positive!!!
Her attitude for the music and the fashion begun when she was really young!! In fact ,at the beginning she was a dancer and then a vocalist,performing in the best clubs,in Italy and even in Europe,collaborating with the best dj!! During this period another passion came out in her…. the lingerie!! That’s why for a while she left the night life,to realize her dream!! She opens the first shop in Italy of lingerie and alcove item’s .All the stuff was designed and created by her,for a women really sexy….. During this time she really missed the music,so she starts to go in a record company to learn the djing technique and nearly like a joke she starts to play with records especially with the vinyls. She was really grateful and motivated,that she decided to sell the shop and to buy all the stuff for her new experience, as well as job!!!!!Madame Betty dj starts to play in the best clubs in tuscany;but the big chance came out when she was chosen by CAMPARI amoung 50 italian women dj to play in the national tour,in the most exclusive clubs!!!!!! Her style,her shows,her music,her nature makes MADAME BETTY DJ unique and exclusive! In March of 2012 during the Winter Music Conference in Miami, performs at one of the most glamourus pool party … inside the Madonna’s Villa. Shares the console with the Supernova and Joe T Vannelli, an event organized by Fashion TV, a TV channel known and appreciated in the world of fashion and the exclusive partys. During the Music Conference will also perform at … Sethai immediately achieving Miami with her music and her precious style. In September 2012 in Playboy magazine, is published an exclusive and prestigious article entirely dedicated to her personality. Madame Betty will represent the brand “Playboy” throughout the winter tour 2012/2013. Even in the musical field Betty is quick noticed placing immediatly her second song, as a producer, on the charts , “You”. It is also selected by the Dutch DJ Maria-Helena in the official podcast for the National Airline “KLM” throughout the period of ADE 2012 in Amsterdam with songs of labels of the highest level. Now her radio show is playng on m2o channel in the program Kunique, with an hour of music signed Madame Betty … And as she says …. … J’ADORE!