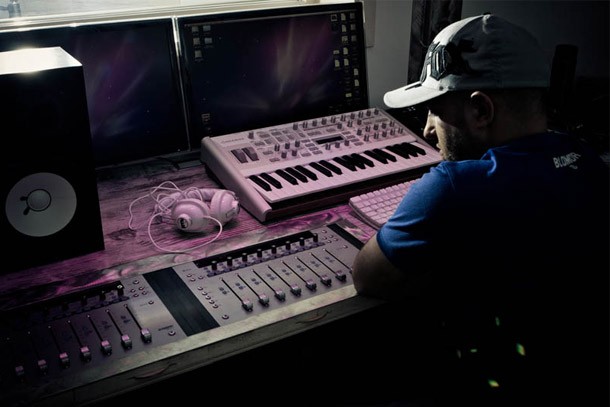 By the age of 16, Paolo Ortelli was already consumed by dance music, listening obsessively to radio in the north of Italy, but more so, driven to observe and absorb his DJ idols amid the live setting of the club arena. But alas, as a teen with a firm parental curfew, the young aficionado was relegated to hit the scene in the dead of afternoon, many hours before kaleidoscopic lasers brought light to the night.
Ah, but that was then. Today, as one of Italy’s leading remixers, DJs and dance producers, the age of Ortelli has dawned. Alongside 80 license deals from his first three singles alone, the Reshape Records/Dipiu Music artist has commandeered 50+ chart positions around the world, including No. 1 smash “Sex On the Beach” (as alter-ego Spankers with collaborator Luke Degree)—garnering YouTube views in excess of 50 million—alongside collaborations with Pitbull, Lil Jon, Selena Gomez, Cher Lloyd, LMFAO, Snoop Dogg, Sophie Ellis Bextor and fellow DJ A-listers Armin Van Buuren and Bob Sinclar.

“The greatest lesson I have learned is that to be a real DJ, you must give even more than an artist or a musician,” Ortelli offers. “What you do in the recording studio has to resonate with public on the dance floor, but at the same time, you are a psychologist. You’re not up there to just put on a show. You must watch the audience, observe what they want and react with passion. It’s all about giving everything back to the people.”
While still in his teens, Ortelli was able to parlay his passion for dance as an on-air personality via his own local Italian radio show “Superdance FM,” where he developed repartee as a personality while spinning his own re-rubs of popular songs. Ultimately, he was hosted on a number of Italy’s leading FM stations, including Studio Più, Viva FM HitChannel 102.5 , Radio Deejay and lately m2o (K-Unique).
He notes, “I started with a 15-minute program, which helped me grow up and develop my skills as a DJ. I learned how to improve songs by editing them with the technology at the stations, and to use computers and MIDI to make full-fledged productions. This was so important for me.”
His exposure on radio led to a connection with the man who would become Ortelli’s professional muse: In 2002, he was contacted by Media Records Owner and Executive Producer Gianfranco Bortolotti, who had previously nurtured the likes of renowned DJs Gigi D’Agostino, Mauro Picotto and Mario Più (just to name a few). Working for the first time in a high-end recording studio, the young talent produced his first hit, “Ripassa,” followed by a high-profile remix of DJ Sammy’s “Sunlight.” Ortelli also worked for the label as a remixer, helming Gemelli Diversi’s “Mary,” which fostered his first accolades, for 2003’s Best Remix at the Italian Dance Music Awards.
Ortelli says, “Gianfranco was essential to me as an artist. He was absolutely the best executive producer of the time. He worked with the most famous DJs in the world, and not only supported me, but I was able to work with the label’s sound engineers, which taught me how to utilize technology and instrumentation in dance music.”
Ultimately, Bortolotti retired from the music business, which left Ortelli primed to step out on his own, equipped with the tech tools to mesh with his innate talent and melodic savvy. Uniting with musician brother in arms Luca de Gregorio (a.k.a. Luke Degree), the pair founded Spankers and released “Sex On the Beach” in 2009, which
became a No. 1 dance anthem around the world, including a placement in the 2013 Kristen Wiig hit comedy feature film “Girl Most Likely” as well as on-air placements in the hit TV shows “CSI Miami” and “Jersey Shore.” Ortelli says, “With that song, I started making appearances as a live DJ around the world. It changed everything.” Indeed, from there, he became a go-to guru, working with A-level pop and hip-hop acts around the world, which ultimately led to all-star full-length Spankers project “365,” spawning hit singles “Chupa Rico” and “Everyone’s a DJ.”
Meanwhile, Ortelli continues to excel under his own name, via hit collaborations with Luke Degree, Pat-Rich and Bob Sinclar and globally successful remixes of Selena Gomez’s “Slow Down” (which reached No. 1 on the Billboard Club Play Chart) and “I Wish” from Cher Lloyd featuring T.I. He notes, “I can make songs like ‘Sex on the Beach’ that are a bit trashy and fun, and then use my real name to produce songs with beautiful melodies. It gives me options to show both sides of my personality.” Today, he continues to spin across the world’s marquis dance floors, including a Who’s Who of clubs: Moscow’s Soho Rooms, Fabrique and We Are Family, Russia’s Z-Top, Club Gold and Platinum Club, the Ukraine’s Radmir, Tokyo’s Ageha, Vision, Colour and Vanity, Osaka’s Dyana and Giraffe, Lebanon’s SkyBar, Greece’s Super Paradise, and so many more in Turkey, Slovakia, Kazakhstan, Azerbaijan, Austria, Albania, Slovenia, the Czech Republic and South Korea. Ortelli also serves as Official House DJ of Jimmy’z Monte-Carlo. As he continues to amp his brand-name status—including the first-quarter 2014 release of Spankers’ new single “Party Time,” featuring Machel Montano & Fatman Scoop—the producer, remixer and DJ remains humble about his status. “Of course I would love to be considered the next Avicii or Axwell—my idols in the dance community—but my ultimate goal is just to find satisfaction in life,” Ortelli says. “I have already had amazing opportunities in show business. Am I happy? Yes, and very satisfied. But I believe there is always room for improving. I won’t stop until I know I have become the best I can be.”