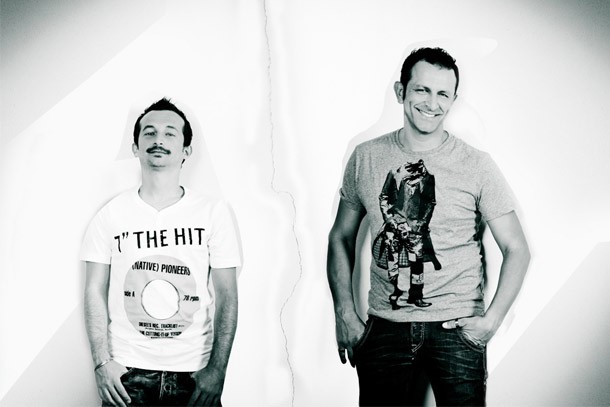 DIEGO DONATI & FRANCO AMATO
Backed by a mass collective of elite spinners that include Benny Benassi, Roger Sanchez, Alex Gaudino and Jamie Lewis, Italian natives Donati & Amato have been steadily rising up the dance scene ladder of late with ever growing strength in their production output which has been backed by numerous club dates to global audiences. Perhaps most famed for their 2010 release Donati & Amato vs. ATFC ‘Thrill Me’, which is a still a playlist favourite among DJs and radio shows worldwide from Defected to Release Yourself. The talented DJ and producer duo have since seen many of their other release shooting up charts from the UK Cool Cuts, Beatport and Music Week dance chart. With a production armoury that consists of dance floor gems such as ‘Like an Angle’ and their final release of 2011 ‘Falling’, the future of Donati & Amato appears to be gleaming with positives. Donati & Amato may also be familiar under their Hernandez Vs. DJ Tyo guise; a pseudonym that has seen them put out tracks like ‘Let’s Get Down’ – which was picked up and heavily rotated by Subliminal head Erick Morillo. Outside of the studio the pair operates one of Italy’s key dance imprints in E-Lab Music. A mainstay for the Italian dance scene for a number of years, the label has since garnered a reputable reputation for discovering new music and emerging producers leading to strong airtime support for the label and its artists’. With their specialist radio show Kunique, which is broadcast weekly on Italy’s leading dance music radio station M2o, Donati & Amato are a leading light in the country for pushing new and upfront dance music whilst acting as a channel for listeners to tune-in to a wide selection of guest DJs from Copyright, Chocolate Puma Jesse Voorn, Scumfrog, Avicii and many others. Through their individual experiences both artists have produced and mastered countless dance tracks for a list of artists over the years; Amato most notably being part of the dance outfit DWA famed for the 1992 club classic ‘Please Don’t Go’ that went onto sell in excess of 10 million sales worldwide, while Donati on the other hand has seen singles out on the label of Alex Neri, as well as on Sony Europe. All this combined talent means this vivacious duo have the necessary skills and foresight to turn a simple idea in the studio into a killer dancefloor favourite. Which may explain why the demand for their name on club billings worldwide has been rapidly on the rise?