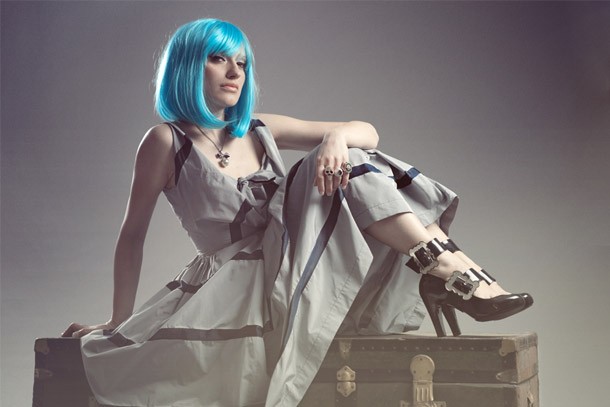 “Rock Angel” as she was called by photographer Doriano Zunino (HOT magazine…music, style and culture, June 2005), the Canadian vocalist Ania J is hard to miss in the Italian club culture. She’s in your face no matter what musical genre, vocalizing over beats next to top International Dj´s. This face of the new (young) music generation has a dynamic spirit, sassy vocals, and a monstrous stage presence! Ania J started traveling all over the world as a model, after graduating from high school. She went to New York , followed by Paris representing Canada in the Metropolitan Top Model contest. Soon after Paris, Ania was living and working in Milan and other European cities including London, Vienna and Athens. She started her career as a vocalist at the after show party of the English fashion designer Andrew Mackenzie. Ania took up a dare by a friend to get up on stage in front of 2000 strangers and sing in front of an audience for the first time in her life. This dare opened up doors Ania never knew existed. Playing the piano by ear at the age of seven and composing her own songs, Ania was destined to pursue a career as a performer. In March 2005, Ania traveled to Miami for W.M.C. (winter music conference) together with producer Giacomo Godi from Supernova presenting their first single track ‘Rock U’. Upon its release, ‘Rock U’ hit the top ten charts in the house genre in Italy, with leading reviews awarding the track a 5 star rating in cities like New York, Santiago, London, and Madrid. In June 2008, Ania J and Supernova released their 1st album Downtown Underground, which included 4 songs co-written by Ania. Two of these songs (Silence is the Enemy and Dude ) became singles with videos on MTV, All-Music and TRL live. Over the past several years, Ania J has been touring solo and also working with various djs ‘ and producers worldwide such as Bob Sinclair, David Guetta and Dj Poet from the Black Eyed Peas. This collaboration has seen her release various singles including Shiver boom boom (with Max Zotti ) and Mul mantra ( with Joe T Vannelli ). These singles and others can be enjoyed on Itunes and Beatport. She’s currently working on her new album as a solo artist with Dj producer Joe T Vannelli. Ania has also had the privilege of performing at various Fashion ceremonies including Dolce&Gabbana, where she shared the stage with international star Grace Jones. Ania J is also the official voice (singer/Mc) for Fashion TV events worldwide, with esteemed recognition from the president himself Michel Adam. The sky is the limit for the talented miss Ania J, so stay tuned as this “Rock Angel” is sure to be around for a long time to come.